Smoker vs BBQ- Which is healthier?


Grilling is one of the most favorite outdoor food activities of many of the Americans...

Things in the grilling industry have evolved big time in recent years and smoker is a significant one of them. Smokers have quickly made their place in the mainstream outdoor cooking units and it has many fans not just in America, but beyond as well.But sometimes it becomes hard to decide between Smoker vs BBQ.

If you are a fan of the grill then you might be thinking that if a grill is a right choice for you or a smoker. It is not at all an easy decision to make.

We need to evaluate both the BBQ grilling process and smoker on the basis of their features and major differences. 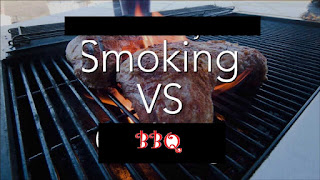 The Basics of Smoking VS. BBQ:


Before we jump onto the actual smoker and grill product rhetoric, we need to first see the difference between smoking and BBQ. Starting with BBQ, it is basically a process or a technique to cook food through a dry heat source. The heat source, in this case, could be coal, propane or wood etc. This process is excellent for roasting food items in a quick time.

Moreover, the technique also adds a great tangy flavor touch, which is quite flavorsome. BBQ has got immense popularity and no party is considered a complete party until there is any BBQ item on the dining table.

BBQ is conventionally done on grills, grill pans or griddles. Out of all these, grills are known to be the safest and the quickest way of cooking tasty food.

On the flip side, smoking is a branch of grilling, which employs smoke in excess for cooking food and eventually completes the process with a dry and roasted flavor. In such type of food cooking, heat is usually on the lower side with temperatures mostly under 400 degrees F.

Such heat level allows the food to roast slowly. You may call smoking as the softer or slower version of barbecue. Smoking is advanced and one of the finest techniques to up your grilling game. You may use a grill too for smoking, but nothing could beat the productivity of a professional smoker.


There are a number of differences between a smoker and a BBQ grill. The difference in equipment is based upon output, setup, availability, consumption, portability, and price. The requirement of the BBQ grill is that the gas supply should be connected or otherwise, coal or woods needs to be added inside the burner.

This could be a time-consuming process and more so when you are not sufficient with heat. Lesser heat is required by such equipment as cook extremely fast. On the other side, the cooking temperature is very high.

Therefore, more time is usually employed to reach that particular temperature. In terms of size, the BBQ grills could be very small and compact. You may have some without any wheels and even a stand.

In comparison, a smoker takes considerably more amount of heat and as well as time to cook. It actually doesn’t cook at very high temperatures, but you need to leave it for a long time n heat. This obviously enhances cooking time.

Such cooking range almost always requires a stand and most of them are on wheels. So, they are considered good in terms of portability. However, both the smoker and grill are almost just as same in their respective setup process.

Here is how the latest charcoal grill looks like...


Smoker VS BBQ/ Grill – Which is a much healthier choice?


The health concern between the two comes from the amount of temperature in which both of them cooks. More heat means lesser fat. Smokers have the potential to reach a high temperature, but the grills are supposed to be much better.

On the other side, the BBQ grills have a major threat of overcooking, which results in the release of many carcinogenic compounds. It is risky and could take you for an oncologist’s appointment.

Other than that, it could also make your stuff harder to digest. It could be a big issue, mainly for those folks, who are already dealing with digestive problems.

On the contrary, smokers are known for even cooking. Cold smoking does have risks or chances of leaving food underdone.

Therefore, a minimum temperature of 400 degrees F is recommended with a smoker, when cooking veggies. In case of higher temperatures, the undercooking risk is also there. Therefore, quick grilling over a grill is not considered to be among the healthiest choices.


Overall and with the above comparison, smokers are usually considered as a much healthier choice as compared to the BBQ grills.

Smoker VS BBQ - The flavor:


The flavor is a critical aspect between smoker and BBQ and just couldn’t be overlooked at all. BBQ and smoker tastes are quite distinct and identifiable, especially when the same food item is cooked in their proper equipment.

A BBQ grill is known to give food items a much rich, drier and spicier taste. You will have more choices in terms of flavors and on top of that, the meat will be cooked very evenly and consistently from the inside.

The special barbecued taste will be the end product, which we all love. On the other side, smokers are known for their smokiness, which reflects on the taste.

This smokiness is what that uplifts dryness. If dryness in food is not something that you prefer, then you can use BBQ sauce or any other similar sauce to get the juicy taste with a well-cooked food item.

The best smoker you can try for flavor and easy cooking.....

As per the above discussion, a smoker is a clear winner in comparison with BBQ. It is healthier, tastier and has the ability to produce rightly/ well-cooked food. Even and consistent cooking throughout is guaranteed.

This could be time-consuming due to low heat but the final product is worth it. BBQ is a traditional grilling technique, which is still relevant for getting food cooked fast and much juicier, but it has its share of drawbacks in terms of the quality of food being cooked or grilled.

If you are looking for both options in your kitchen ..... look into this...


Comment below which option you prefer the most and why....

Popular posts from this blog

Meat Smoking is the next big thing in the BBQ industry. Smokers’ war is never-ending as there are quite a few different sources to power the smoker. for comparing Electric smoker VS wood smoker we can compare and explore many things.

The source of power in a smoker is a significant thing to consider as the final cooked product very much depends that which type of smoker you used for cooking food. Two of the most popular smokers are electric and wood smokers.

Both have their own specific set of good things and the limitations that we will be discussing here. This will help you to decide which type of smoker between electric or wood should be the most preferred one.


What is a Wood Smoker?
A wood smoker is actually the most common of all the available smokers. They are typically designed to smoke food items of any sort by burning charcoal and/ or wood. The fuel, which in this case is wood or charcoal could be added into the fuel compartment of the wood smoker.

Once, the …
Read more